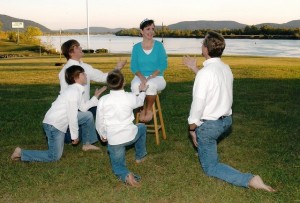 For Karen, one of the chief benefits of living in a house filled with boys was that she was the uncontested queen. My own position as the Alfa male was, by its very nature, subject to increasing challenge as the boys grew up, but Karen’s place in the hierarchy was always completely secure. There was no competition for her spot because she was in a class by herself. She didn’t even have to deal with Barbies that had better figures than hers!

Being the family’s sole example of everything feminine was a tremendous responsibility, but Karen took to it with all the grace befitting a queen. She occupied her pedestal with humility and strength, and set the bar high for all the other girls who would eventually enter our boys’ lives.

One of the chief responsibilities of royalty is to maintain order in the kingdom. When our group of aspiring Neanderthals needed civilizing, our Queen always knew exactly how to provide the necessary correction. Sometimes that involved stern words. In other cases all that was required was a “look.” Usually pushups or extra chores were involved. In rare cases, when the minions didn’t respond to more humane correction, she resorted to the cruelest of all punishments – she cried.

Boys have no defense against this tactic.

In fact it scares them to death, and they don’t even know why. Sure it carries with it the implication that dad’s going to weigh-in when he gets home, but it’s something more primal than that. Dad’s punishment, however severe, was always going to be preferable to mom’s crying. Mothers who have all boys just don’t cry that often, so when they do it’s serious. Very serious. Not like “we’re going to get into big trouble” serious, but like “the planet is falling out of orbit into the sun and we’re all doomed” kind of serious.  Most guys will do whatever is necessary to make sure this sort of thing never happens. Thankfully Karen didn’t employ her weapon of mass destruction very often. We tried to make sure she didn’t have to.

We made it our business to keep mom happy.

This manifested itself in a variety of ways. I’ve already mentioned our rule that no burping or passing gas was allowed when mom was in the house. Such things just aren’t done in the presence of a Queen. When things needed doing around the house we chipped in, not out of obligation or some sense of duty, but because we wanted to keep the Queen happy. (OK, maybe there was some obligation, but either way it made her happy!)

When we sat down at the dinner table each night, we thanked God for His blessings and then we thanked the Queen for preparing the food.

“Thank you mom, for goooood dinner!”

We knew it was important to show our appreciation for her efforts, so we did this before we ever actually ate any of it. We were recognizing the fact that she had planned, shopped for, and prepared a meal for us. She had done so as an expression of her love for us, so we were loving her back by appreciating her hard work.

Looking at it this way meant that whatever mom prepared for that meal was what we were all going to eat. Period. There weren’t going to be any choices from “column B,” or an option to grab something else later.  Suggesting such was to imply that the Queen was there to serve us, and that was patently ridiculous. She was the Queen, and it was our duty to serve her.

The fact that there were four hungry men around the table ordinarily meant this wasn’t an issue, but there were rare occasions when even the Queen would admit that her “experiment” with the recipe for that evening didn’t turn out exactly as planned. Even in those situations it was our duty, as loyal subjects intent on making her happy, to assure her that it was wonderful and to eat it happily.

The Queen was wise though. She understood that not everyone liked everything (even if we weren’t going to admit it), and that sometimes things didn’t turn out quite the way she planned. So she provided some mercy rules.

When she tried new things, the Queen would often poll the crowd as the meal progressed and each participant was allowed to assess the meal as either “a do-again” or “not my favorite”.  These were the only two options allowed. If the polling revealed a general consensus that this recipe was mostly not a favorite, she was OK with that and either modified it the next time or struck it from her future menus.

When the boys were little, a declaration of “not my favorite” normally brought mercy in the form of a set number of bites, after which they could be done. The exchange usually began with a query about how old the boy was. If he was four, then four bites was probably going to be the rule. When they got wise to that tactic they sometimes tried to game the system by giving an incorrectly low age. But the Queen wasn’t born yesterday. With great compassion she would respond that she knew the poor respondent who answered “two” was actually four, and it must be that malnourishment had addled his poor brain. As such, she saw no recourse but to require six bites so the situation could be corrected.

2 Responses to The Queen